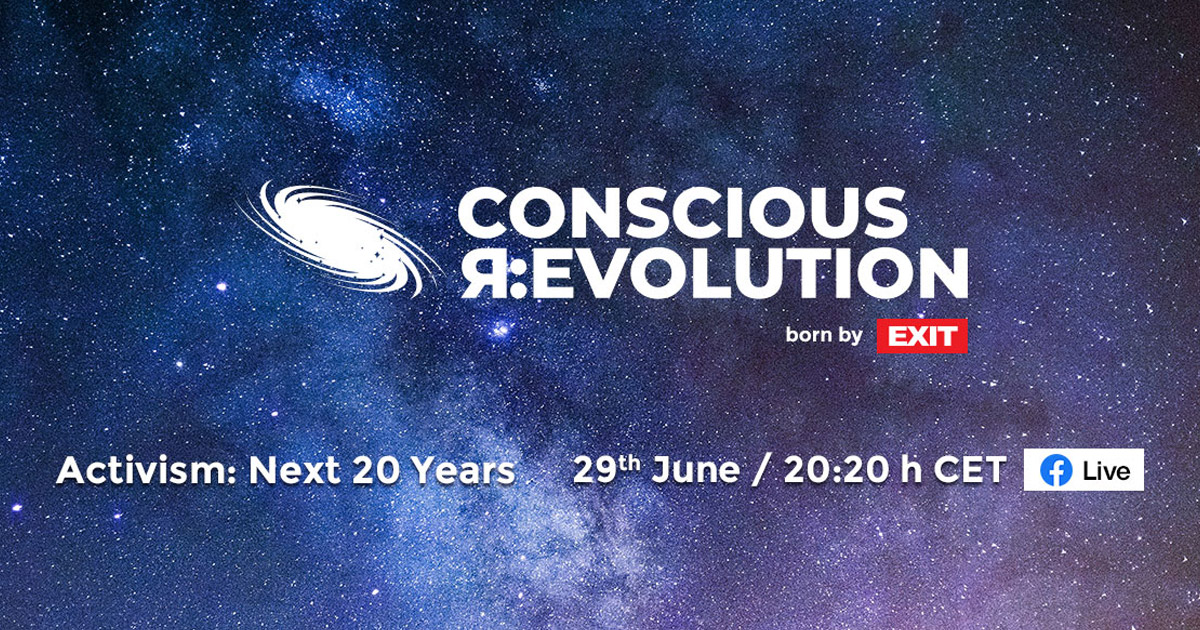 The first panel in the Conscious R:evolution series was held on June 29 at 20:20, on the birthday of EXIT, with one of the world’s most famous motivational speakers and the author of many global bestsellers, Nick Vujicic.

The panel brought together EXIT founder Dusan Kovacevic, as well as Lindsay Hadley, one of the world’s most sought-after consultants in the field of social activism and co-founder of the Global Citizen platform, whose humanitarian festival has featured numerous superstars such as Beyonce, Jay-Z, Coldplay and Lady Gaga.

The host of the talks, which brought a new insight into how to build a better world in the future, was Henry Ammar, a popular American motivational speaker.

The panel was broadcast live through EXIT Festival Facebook page.

Nick Vujicic is an Australian with American and Serbian heritage, born without arms or legs who has become a world-renowned speaker, New York Times best-selling author, coach and entrepreneur.

Vujicic faced tremendous obstacles in life from living life without limbs, to being bullied at school and fearful for his future with no purpose in sight. Without hope, his feelings of helplessness and isolation led him to attempt suicide. Vujicic persevered through life’s challenges and discovered key principles which enabled him to find his purpose and turn obstacles into opportunities; making him one of the most sought-after keynote speakers in the world! Millions of people have found hope, purpose and the strength to overcome their challenges through Vujicic’s inspirational speeches and powerful coaching.

Vujicic is an anti-bullying advocate who travels the globe speaking to millions of students in partnership with Education Departments of several Governments. He has created an innovative Social Emotional Learning (SEL) Curriculum called “Attitude Is Altitude,” wherein he teaches students to make positive changes in their lives and their communities.

He is also the founder and CEO of the non-profit ministry Life Without Limbs. Vujicic has been featured on BBC, 60 Minutes Australia, CBS Sunday Morning, Oprah’s LifeClass, USA Today, People Magazine, ABC News, The Glenn Beck Program TLC, LA Stories, and many more. He personally connects with his huge social media following through “The Nick Vujicic Podcast”, and engages through webinars and coaching.

Consultant and Producer in the Nonprofit Sector

Lindsay Hadley has become one of the most sought-after consultants and producers in the nonprofit sector. She has demonstrated her exceptional fundraising skills, raising more than $35M+ directly for her clients and has leveraged $Billions for causes through her campaigns and events. Hadley was a Founder Member, Chief Development Officer and Executive Producer of Global Citizen, The End of Polio Concert in Perth, Australia, and the Global Citizen Festival in Central Park two years in a row (2012-2013) and producer 2014.

The Global Citizen Festival has featured the world's biggest music acts, Hollywood actors, and countless world leaders. The festival secured a live audience of more than 60,000, leveraged $1.3 billion in new funding commitments, and reached more than 3 billion people worldwide. It is the largest charity event syndication to date.

In 2014, Hadley launched FilmRaise that partnered with some of the world’s top NGOs including the Nelson Mandela Foundation and The Malala Fund who earn money for every view of the film on their behalf. The platform has been praised as Indiewire and Forbes as “innovative” and “inspiring.” Lindsay was selected as a winner in Utah Business magazine’s 2015 FORTY UNDER 40 Awards.

Hadley is CEO of the Hadley Impact Consulting, which worked on the first ever social impact fund partnered with the Vatican called the Laudato Si Challenge. Hadley is a founding partner of the LSC and Executively Produced the first ever Demo Day at the Vatican. Lindsay is also the founding development consultant for United for Global Mental Health. Another client of Hadley Impact's is The Mental Health Coalition founded by Kenneth Cole which created the "How Are You Really" campaign which reached 600M+ people in 4 days.

Founder and CEO of EXIT festival

EXIT festival, founded by Kovačević, is one of the best-known festivals in the world. It has been awarded on several occasions as Best European Festival (2007, 2013 and 2017), and has graced the pages of almost every influential worldwide media such as CNN, BBC, Time, The Guardian, The New York Times, The Sun, Forbes, Daily Mail, Independent, Euronews, Lonely Planet, Huffington Post and many more.

EXIT has thus far attracted hundreds of thousands of tourists to Novi Sad, bringing more than 200 million euros in profit to local economy while expecting to at least double those numbers in the next decade. Along with the contribution to Serbian tourism, EXIT has significantly contributed to Serbia’s and Balkan’s image promotion all around the globe.

In 2015 Kovačević became the youngest person ever to receive a February award, given by the city of Novi Sad as the most significant recognition to extraordinary individuals who have contributed positively to the city. He is also the initiator of numerous social activism and humanitarian projects which led to the shift in attitudes of the decision makers and general public, instigating positive social changes in Serbia and in the whole region.

Henry Ammar is an International Life Speaker and Entrepreneur who hosts the Top 10 Podcast, “Making It Happen with Henry Ammar.” The podcast hit #1 in the Training Category and #6 in the Education Category on the iTunes Charts.

As a keynote speaker and empowerment coach published in Forbes, he has positively impacted people across the globe, speaking to audiences as big as 40,000+ people at a time.

Ammar now leverages his successes in music, leadership, and coaching to bring pop culture and practical empowerment together to free the world from fear and limiting beliefs and inspire confidence.

He is an empowerment coach to pop culture celebrities and influencers. He is also the Personal Development Director and US Representative to the Exit Festival (Best Major European Music Festival for the past 3 years).

His most recent brainchild, MakeItHappen.Life, with the slogan “Inspiration. Fun. Repeat.” was created to give the world inspiring content and empowering experiences that help people lead confident and fulfilling lives.